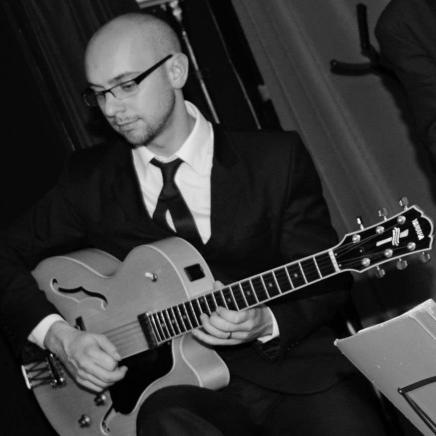 Rich Hamer is a professional musician, performing and teaching in the UK. He studied at Dartington College of Arts and holds a BA(Hons) degree in Music. As a respected guitar teacher with over 20 years experience he has taught hundreds of people to play in various contexts. He founded his Guitar School in 1998 and has run it successfully ever since. Rich has also worked as a guitar tutor in education, at primary, secondary, college and university level. He now teaches guitar at Ivybridge Community College, Tavistock College, and for the Music BA course at University of Plymouth.

As a highly experienced guitarist, Rich has performed, composed and recorded across a wide range of genres. He started out young, working as a solo classical/spanish guitarist and as an electric guitarist with rock and metal bands. He also worked in acoustic duos and blues/funk bands. Now he performs primarily as a jazz guitarist. He has a widely available album called Double or Nothing with jazz guitar duo, Hamer & Co:

Lately, Rich can be found playing carefree speakeasy music with Hot Ginger, and performing everything from cool and smooth to hot and cooking jazz guitar with his long-standing project, Hamer & Co. He sometimes appears in other bands too. If you want to come and see Rich live, just check his performance dates and come to the next show!